What started with a dream...ended in a legacy! 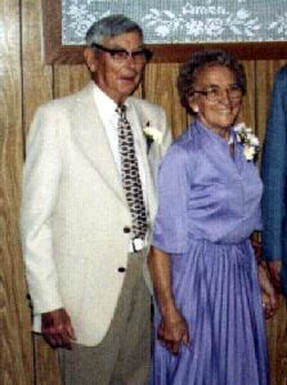 Art and Agnes (Brenholdt) both grew up on their respective family farms in Cushing and both attended First Lutheran Church.
Art & Agnes 1981
Art was born in 1899 and Agnes in 1906.  They were married in 1931 in Cushing at First Lutheran.  They raised two children, Sally Ann Skone Nelson and Janice Jean Skone Dahl and had 5  grandchildren, Kathy & David Nelson and Mark, Cari and Kirk Dahl.
Art’s sister Ruth married Agnes’s brother Palmer Brenholdt and they went into business together in Ogden, Iowa in the Frozen Locker, Butcher and  Creamery Business.
Always active in their church, they also established the Double-A-Bar-S Ranch on the banks of the Des Moines River near Ogden where they raised horses, goats, chickens, pigs and donkeys. The Ranch served as a Christian Camp for local children who learned to ride horses and take care of farm animals.
Had motorhomes or travel trailers been popular back then, Art & Agnes would have owned one however they made due with a big gray Hudson, circa 1948 whose backseat folded down into the truck where they camped while traveling.
Agnes always had her camera in hand and shot 1,000′s of photos, she was one of Kodak’s best customers.   In addition, Agnes was an accomplished artist and painted countless oil paintings, which she sold and gave away to family and friends.
In 1969 they moved back to Cushing to follow their “Dream,” the “Dream” that became Skonewood Christian Retreat Center.
Art and Agnes whose lives touched out to many, many Christians throughout the years continue to do so today through Skonewood.
Art passed away in 1988 and Agnes in 1998 but they are still with all of us at Skonewood.
Skonewood's Legacy Article