Wednesday, June 27, 2018, Inter-County Leader Northern Currents, Section 8
Mary Stirrat | Staff Writer
Today, Skonewood Christian Retreat  has seasonal cabins, a campground, chapel, and a year-round fellowship center for use by families, groups, and individuals.
Located on Little Mirror Lake (formerly Pickerel), Skonewood also has a beach, fishing docks, and boats for use by guests. The gentle slope to the lake offers an excellent sliding hill in winter and the lake itself is great for ice-skating.
Art and Agnes (Brenholdt) Skone both grew up in the Cushing area, moved to Iowa where they had a meat butchering plant as well as a horse ranch.  The couple would begin children from Chicago to the horse ranch, introduce them to Jesus Christ as the youngsters learned to care for and enjoy the horses.
In the early years, before Skonewood was incorporated, the Skones conintued to use their horses in ministry. "It was just natural for them to keep sharing Christ," said their nephew, Ron Skone, of Amery. 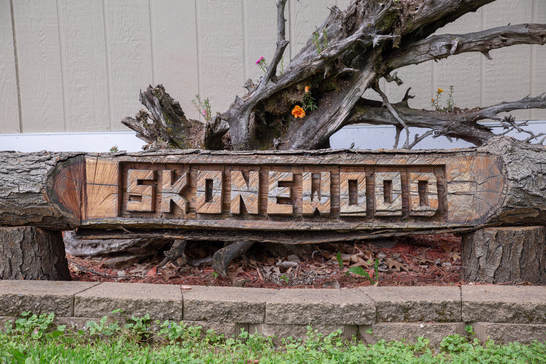 eOrganizing
When Skonewood was incorporated as a religious nonprofit organization it was legally set up to be run by a 12-member board consisting of six men and six women. This continues to be the makeup of its governing body.
In addition, a couple with no affiliation to the board would serve as hosts and caretakers without pay but with the house to live in rent-free.  Agnes and Art Skone served in the capacity from 1977-1983, followed by Gordy and Henrietta Ludwigson from 1983-1990 and Avis and Ron Lindblad from 1990-November 2017.
In February 2017, Dave and Diane Engstrand became the fourth host couple to Skonewood's history. They are natives of the Trade Lake and Falun areas and have family in the area.
Long familiar with Skonewood, about two years ago Diane and her granddaughter were at one of the Sunday night concerts and Diane came to realize that she wanted to live there.
November 2017, as the Lindblads planned for retirement, a board member contacted the Engstrands and asked them to consider coming to Skonewood as volunteer hosts and caretakers. The couple had some ends to tie up, like selling their home, then moved in February 2018.

Growing
Some of the initial improvements, notably construction of the year-round fellowship center, were funded through the sale of 40 acres of the property as well as the proceeds from Agnes Skone's original paintings.
All subsequent improvements were made possible through donations, since no fees are charged for using the buildings and grounds.
Just during the Skone's time as hosts the horse barn was converted to a picnic shelter, and the shed attached to the cabin was removed. This cabin is named Linga Longa, encouraging its guest to slow down and relax.
A volleyball court and a softball diamond were built, and playground equipment was installed.  Walking and cross-country ski trails were developed throughout a 17 acre wooded parcel, and swimming and boating were encouraged.
Another important change during the Skone's caretaking days was the addition of Sunday evening services by the lake, which were later moved to the fellowship center and still continue throughout the summer.
During those early years about 300 people annually took advantage of what Skonwood had to offer.
Getting the word out so more people would use Skonewood was the board's focus during the years that Gordon and Henrietta Ludwigson were hosts. During those seven years the annual usage grew to about 3,000.
Weekly Bible studies were held, and both adult and youth church groups one to Skonewood for a daylong or overnight retreat.
During the 28-year tenure of the Lindblads the facilities were improved and expanded, with the construction of a 30- by 50-foot multipurpose building with a recreation room and maintenance workshop, and a shower/rest room building.
The campground was expanded, from the original 12 campsites to 25 with electrical and water hookups.
"We give a lot of credit to Ron and Avis," said Ron Skone, who is currently a member of the board. "They did a great deal of work to build up the facility."
An unused one-car garage was moved on-site and converted into a cabin called Haven of Rest, and a second camper shelter was added.
Art Skone passed away in 1988, and in 1995 Agnes funded the construction of the chapel in his memory. Her son-in-law, grandson and board member Gene Benson built it on the hill overlooking the other facilities and the lake.
Despite the many improvements, most of which were done by the Lindblads, Skonewood was debt free. The annual budget ranged from $30,000 to $44,000, depending on the maintenance or improvement projects undertaken that year.
Because of the generosity of Skonewood supporters, the improvements have all been made without incurring any debt.
Still in their first year at Skonewood, the Engstrand are not only excited about what the retreat facility offers to summer visitors, but the opportunities available for winter retreats as well.
The year-round fellowship center is complete with rest rooms and showers, a kitchen and big spaces that make it a great place for individuals and church groups to get away.
Pingpong, table games, cross-country skiing, sledding, skating and ice fishing give guests plenty to do if they would prefer not to sit with a good book.
"They are going like gangbusters," Skone said referring to the Engstrand's. "They are making it as homey and beautiful as possible, receiving the guests with big smiles and Christian hearts."
Legacy
Ron Skone, son of Art Skone's brother, is still actively involved at Skonewood as a board member and regular visitor.  He describes his Aunt Agnes as "the determined one" who finished what she set out o accomplish, and his Uncle Art as "the worker bee."
God is still very much using the place, he said, and is very much involved. Evidence of this is found in last year's projects, including the re-roofing of the house along with the entire lover level of the fellowship center.
Donations coved all the costs, not only of improvements but the regular maintenance and other expenses.
"When you can do that," said Stone, "you know the Lord is walking with you. That's how it's been since 1977, when the property was first donated to Skonewood.
"God is looking out for us."
​